The day I lost it

If you watched me on the news in Missouri, you might have thought I had my act together but to be totally transparent, I wasn’t ok… 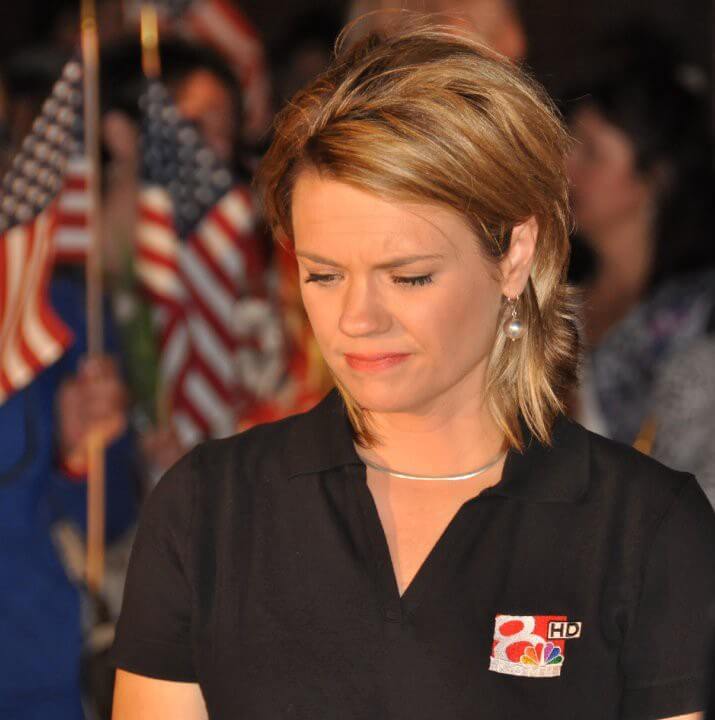 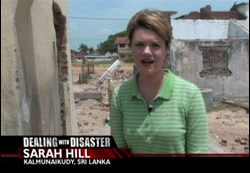 As a television news reporter for more than 20 years, I covered lots of trauma and never thought it would affect me. And then in 2009, I met a big bad wolf. I dropped my berry basket and I lost my shit.  If you watched me on the news in Missouri, you might have thought I had my act together but to be totally transparent, I wasn’t ok.  Hours of listening to a police scanner, seeing dead bodies, covering conflict, natural disasters, and stepping inside the stories of families who lost children weakened me in a way I didn’t expect.

It’s not all the media’s fault. You need that information to keep you safe. Selfishly, I created a feature franchise that focused on positive stories in an attempt to try to fix myself.  But after decades of me choosing to consumer information high in negative fiber, it took a couple of trips to the hospital to understand my media diet was, in fact, making me sick.

As my husband was driving me to the emergency room in 2009, I thought I was having a stroke.  Stuttering. Heart racing. My body was trembling. I was incredibly dizzy when I closed my eyes and I had this overwhelming feeling of doom. I asked my husband to drive faster because I thought I was going to die.

After a couple more trips to the ER in the following months, and about a year of tests that ruled out stroke, epilepsy, and heart problems, my husband who got his PhD. in counseling psychology, told me what I knew all along but didn’t want to admit.

“Sarah…these are classic signs of anxiety. You are having panic attacks.”

If you’ve never had a panic attack, it feels like someone turns up the volume on your nervous system and sets fire to your hair. You’re convinced you’re going to suffocate or burn to death. I tried medication but it left me numb and woefully unable to sleep. 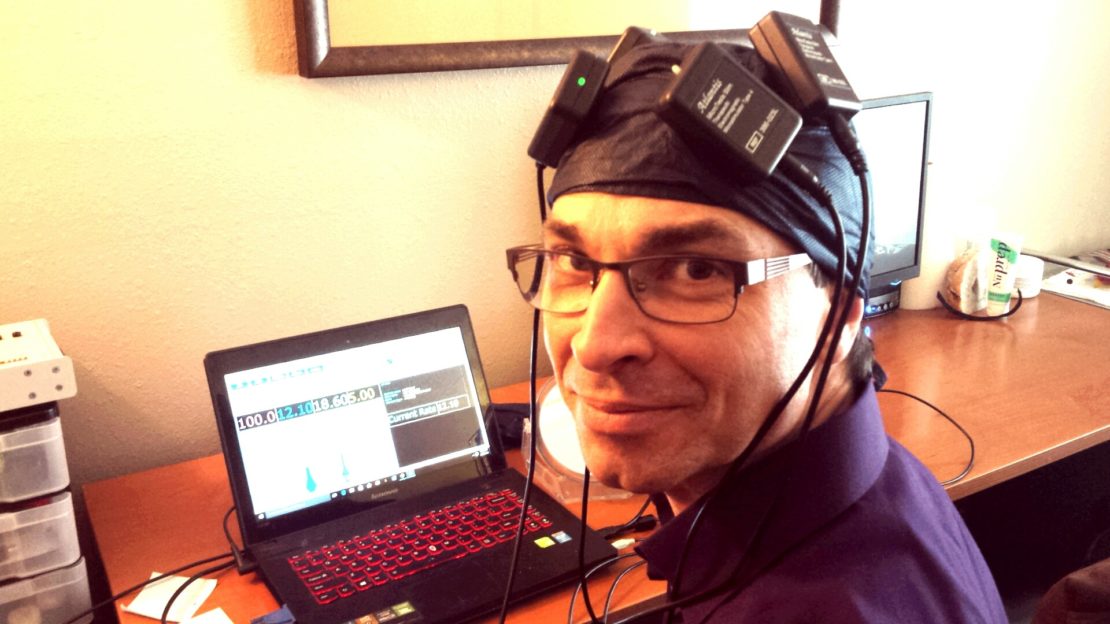 I didn’t want medication. My husband’s partner in his counseling practice at the time was a psychologist, Dr. Jeff Tarrant. He had this weird looking technology he’d been using for years to educate people on how to train their brains.

Using neurofeedback, his clients could quiet the fast activity in their minds. I reached out to see if Jeff could write me a digital prescription that would help me sleep. With several electrodes stuck on my forehead attached to a computer, my brainwaves were attached to a tiny airplane that I had to keep below a certain threshold using my thoughts to influence my calmness.

With some effort, I was able to eventually learn what thoughts or memories I needed to recall in order to slow the fast waves in my brain.

After a couple of weeks of training, I developed a narrative about that plane that made me fall asleep.  Developing a story; mine was about cooling my jets, made it easier for me to recall my quiet place.

The digital prescription that Jeff wrote for me a decade ago along with my made-up stories form the foundation of Healium XR today, a drugless kit that can quickly reduce stress and increase feelings of positivity. I use Healium to help me sleep. 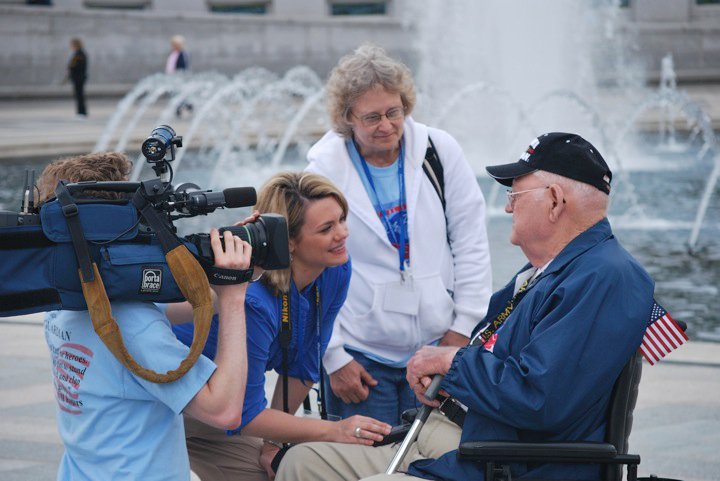 Veterans led us to Healium

In 2013, I got out of the news business to save my health. After KOMU-TV, I went to work for another great company called Veterans United Network that allowed me to tell video stories about Veterans.

We developed a program called Honor Everywhere that used AR and VR to do virtual tours of Veterans memorials in Washington, DC for terminally ill or aging Veterans unable to physically travel.

After thousands of VR tours and other demonstrations, we noticed the immersive stories we created appeared to be affecting users’ physiology. The user would raise their hands beyond what their caregivers thought possible. I would watch as their breathing slowed. Repeatedly, they appeared to relax while wearing the goggles. 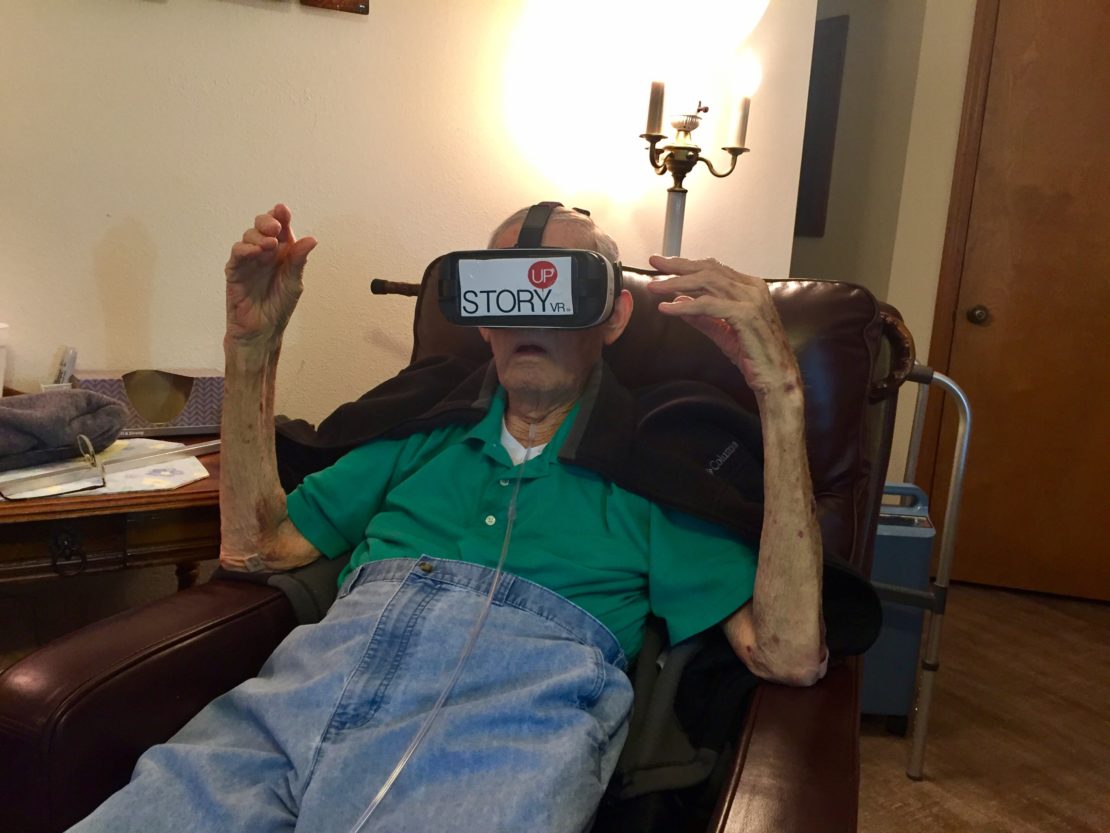 But why? Curious, I reached out to Jeff, the same person who wrote an EEG prescription for me 10 years ago, to see if he could study whether VR was truly affecting their physiology.

When he shared with me this image of Healium’s impact on users’ fast activity in the brain, I knew we needed to better understand what kinds of stories and inputs could impact the user in beneficial ways. 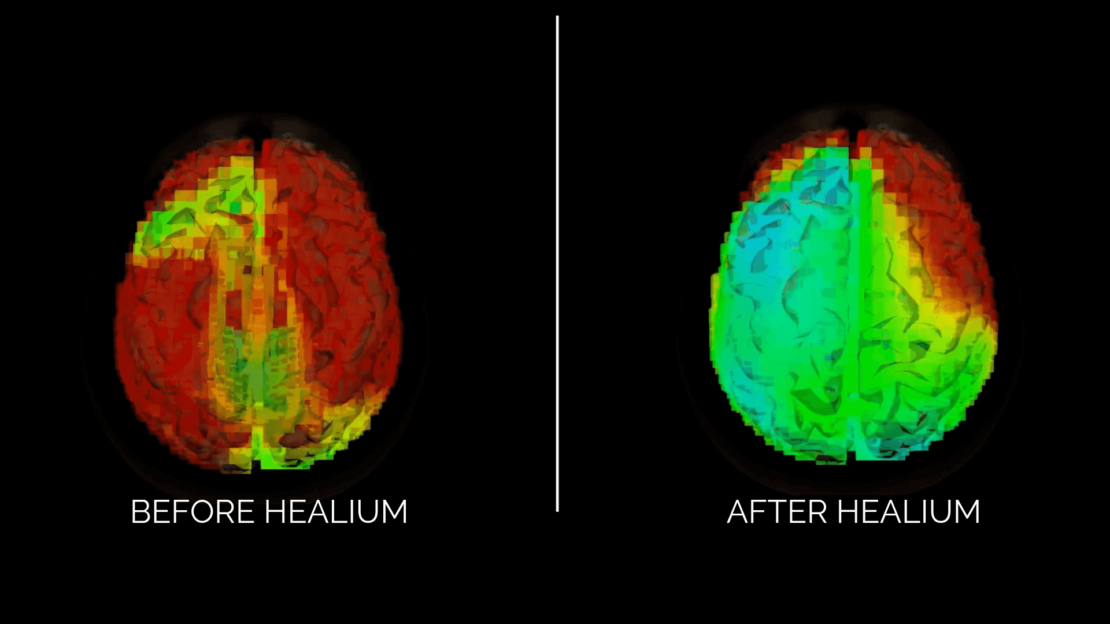 For a year, we studied physiological and psychological changes anecdotally and with institutional review board studies. Some of them ended up in peer-reviewed journals.  Frontiers in Psychology and the Journal of Neuroregulation both published studies on Healium’s ability to reduce moderate anxiety and increase feelings of positivity in as little as four minutes.

Other scientists have also confirmed that VR does indeed affect the brain and when combined with story and a feedback loop has therapeutic value for some populations that struggle with anxiety or sleep.

Dr. Tarrant asked if I could create some immersive stories to use in his neuromeditation practice. We now have more than 20 experiences on the Healium channel and the doc who wrote the original digital prescription for me to sleep… is now, my business partner. 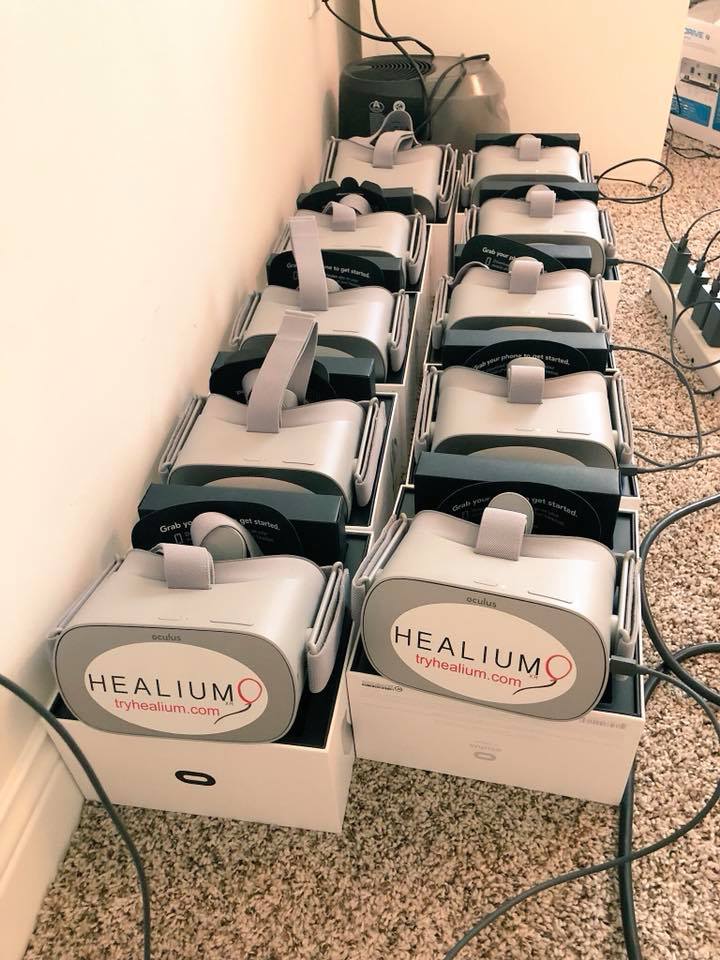 Healium XR…XR which in our shop is short for ‘extended realities’ but coincidentally it’s also the opposite of RX…is a portable, digital chill pill. Thousands of people around the world are using our VR and AR apps to ease feelings associated with anxiety and help them sleep.

Healium kits combine augmented and virtual reality, neurofeedback, and simple, easy to remember stories to quickly shift feeling states. It’s not a treatment for panic attacks or any replacement for psychotropic medication but published studies show Healium can significantly reduce moderate anxiety and increase feelings of positivity in as little as four minutes.

Healium is powered by your brainwaves and your heart rate via wearables like a smartwatch or an EEG headband. Inside VR goggles, or without them with just your mobile device using augmented reality (think 3D objects in your phone), you can see your thoughts and heart rate controlling objects. 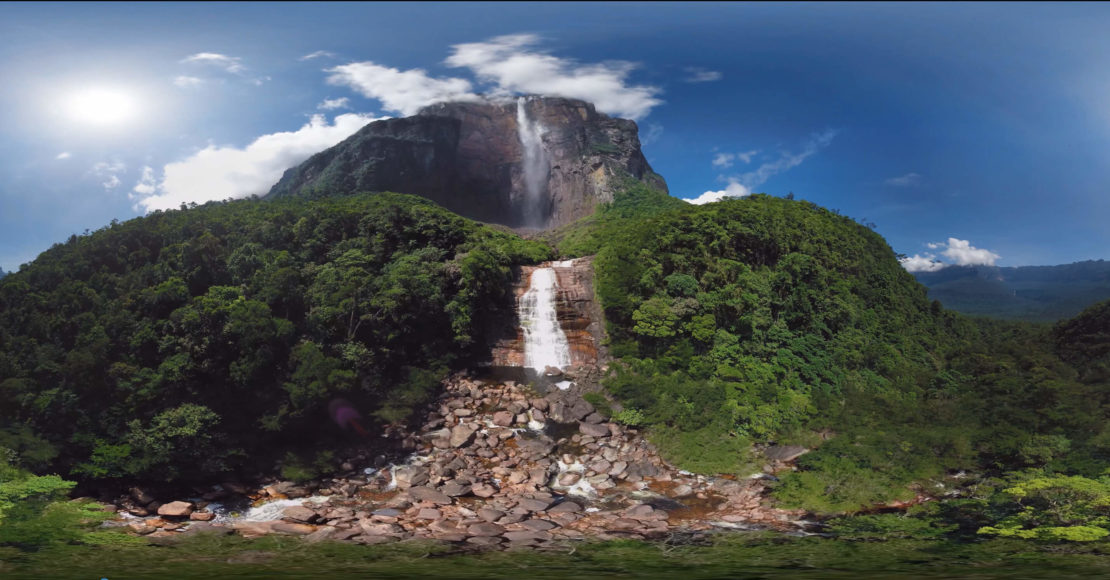 For people who struggle with traditional meditation, this is the opposite of close your eyes and meditate. A feeling mirror, it allows you to see your neurological and biological reflection for the first time and better understand how your thoughts have power to control things not only in the virtual world but the real world as well.

I’m a storyteller, duh. No, really. Stories are the best way humans learn. I can tell you ‘change takes time’ but if I wrap that concept around the story of an augmented reality butterfly making slow incremental changes in its physiology inside a chrysalis, the user is better able to recall that metaphor when they’re in a stressful situation.

Story-driven recall is a powerful tool with Healium as are our own memories.   Cognitive psychologist Jerome Bruner suggests we are 22 times more likely to remember something when it has been wrapped in a story.

Imagine you’re Little Red Riding Hood riding a bike. Healium is like your training wheels. It connects positive feeling states to easy to remember stories that keep you upright.

Then when you’re faced with a stressful situation, you know which way to turn the handlebars. You can unpack that positive memory, remember how good your mind and body are supposed to feel….remember your throughts controlling your environment, and ride on past the big bad wolf.

Here’s to hoping Healium can help other Little Red riding hoods like me who didn’t have training wheels and totally dropped their berry basket. Trust me, the last thing you want to do is lose your shit. It may stink but it’s the fertilizer that will help you grow. 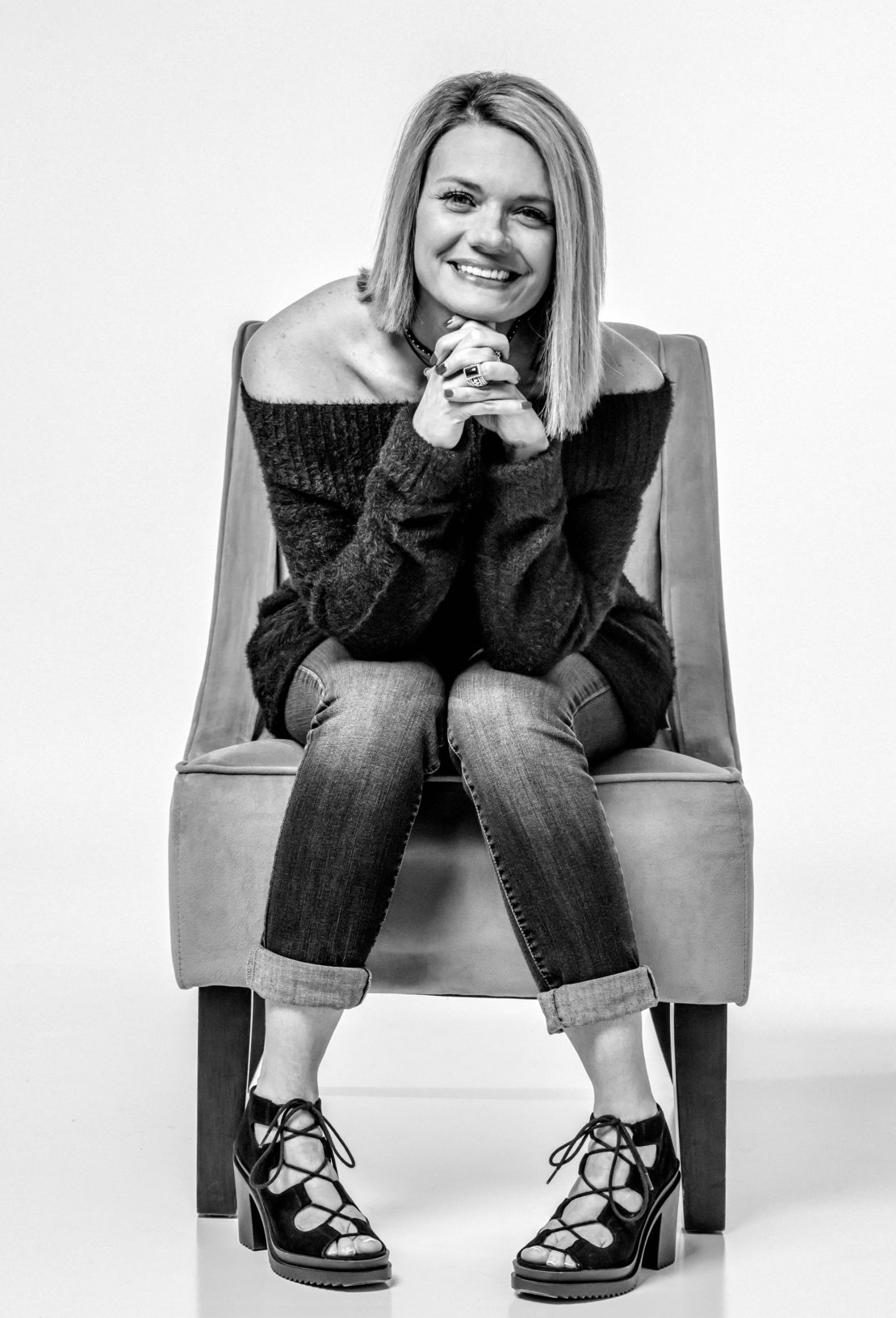