Subscribe to Our Blog
Like what you see? Subscribe to our weekly blog and stay connected!
Your Brainwaves During Sleep | What Part of the Brain Controls Sleep?

Ever wonder what part of the brain controls your sleep? Learn everything there is to know about the neuroscience of your sleep patterns here. Jump to: Which Parts of Your Brain are Involved In Sleep? | The Different Stages of Sleep | Your Brainwaves During Each Stage of Sleep | How to Improve Sleep Quality

The amount of quality sleep we get greatly affects our physical and mental fitness as a whole. Our body uses this time to repair and grow our bones and muscles. Sleep is also necessary for our brain to sort and store memories, as well as maintain healthy overall cognitive performance.

But what exactly is going on inside your brain as you sleep throughout the night?

As experts on neurofeedback and sleep meditation, we’ve created an all-encompassing guide to the neuroscience of sleep to answer all of your questions!

Which Parts of Your Brain Are Involved in Sleep? While it might seem like a safe assumption to believe your brain “ramps down” during sleep, the truth turns out to be quite the opposite.  Your brain remains highly active throughout the entirety of your sleep in order to facilitate continued sleep, memory and emotion processing, dreaming, and much much more.

Without enough sleep, your brain simply does not function properly.

This high level of sleeptime brain activity is the biggest reason why methods of meditation aimed at specific brainwaves are so effective at improving your sleep.

These levels of high activity are especially prevalent during rapid-eye-movement or REM sleep.

What Part of the Brain Controls Sleep?

Different parts of the brain control different aspects of our sleep-wake cycle. The hypothalamus, in particular, acts as the control center for sleep and arousal or wakefulness.

The suprachiasmatic nucleus (SCN) in the hypothalamus controls our behavioral rhythm using light exposure, thus matching our sleep-wake cycle with the external light-dark or day-night cycle.

Other parts of our brain that are involved in sleep include:

– The Brain Stem: Your brain stem controls the transitions between your wake and sleep times. It is made up of three parts: the pons, medulla oblongata, and midbrain. The pons and medulla are responsible for relaxing our limbs during REM sleep, preventing us from acting out our dreams.

– The Thalamus: The thalamus sends information from our senses to the cerebral cortex or central processing structure of our brain. The thalamus is particularly active during REM sleep.

– The Pineal Gland. Upon receiving signals from the SCN, this part of our brain produces more melatonin, the hormone that helps promote sleep and control our sleep-wake cycle.

– The Basal Forebrain: This brain structure is responsible for releasing adenosine, which helps support our sleep drive, and is the opposite of the midbrain, which acts as an arousal system.

– The Amygdala: The part of the brain responsible for processing emotions. As such, the amygdala becomes more active during REM sleep.

The Different Stages of Sleep 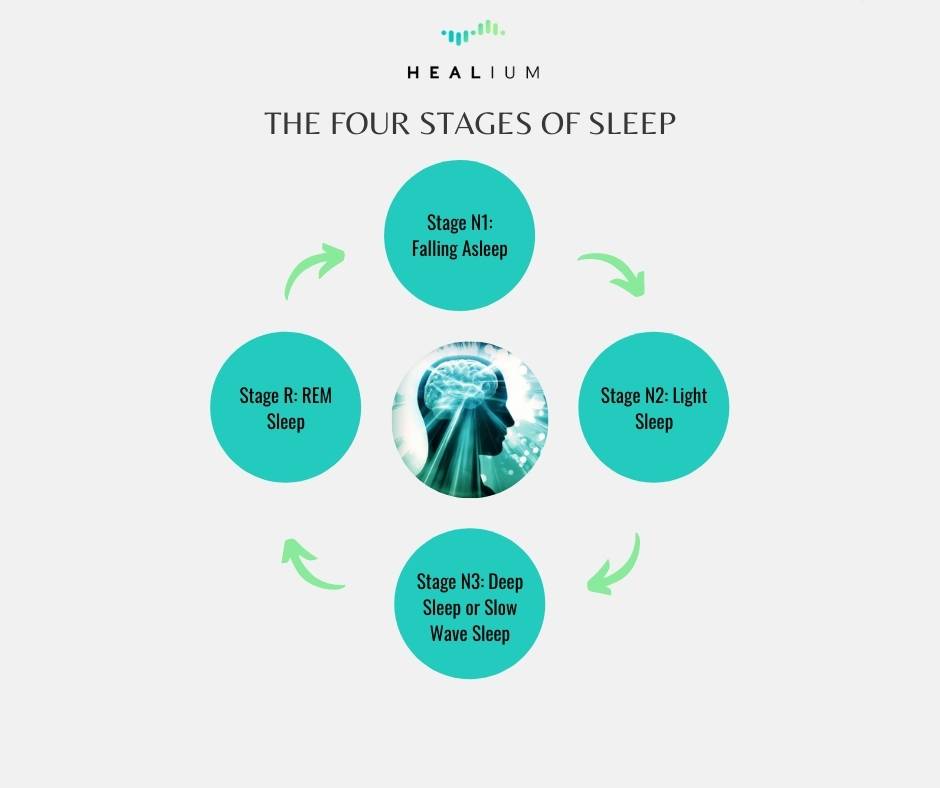 There are two basic types of sleep (REM, or rapid-eye-movement sleep, and non-REM sleep) and four major stages.

We go through these four stages of non-REM (or NREM) sleep and the solitary REM sleep stage several times when we sleep at night. The NREM sleep stages occur first, with the REM sleep stage happening around an hour to an hour and a half after we fall asleep.

Here is a more detailed look at the different stages of sleep.

The wake stage is sometimes not considered a sleep stage due to its nature. However, it is undeniably part of the sleep-wake cycle. The wake stage or stage W can be further divided into two: eye-open and eye-closed wakefulness.

For those looking to improve the quality of their sleep, this is the stage in which you can take active steps to achieve just that! Sleep meditation is very effective just before bed, especially if you’ve supplemented your routine with additional neurofeedback training earlier in the day.

Stage N1 or the first stage of the NREM sleep is when our heartbeat and breathing start to slow down and our muscles start to relax. This stage typically lasts for only a few minutes. It is also known as the lightest stage of sleep.

As we are still transitioning from wakefulness to sleep, we can be roused from our sleep quite easily in this stage.

Stage N2 may be deeper than the first stage but we can still be awakened easily. This stage takes up most of our total sleep time. During this stage, our heartbeat and breathing slow down even more, while our body temperature also starts to drop.

Stage N3 is considered the deepest stage of sleep. It is the most difficult sleep stage to wake up from. It is during this stage that our body facilitates various health-promoting bodily functions, including bone and tissue growth and repair, cell regeneration, and immune system strengthening.

Stage R or REM sleep is widely known as the “dreaming” stage. This stage starts roughly 90 minutes after we fall asleep. During the first sleep cycle, stage R only lasts about 10 minutes. Its duration increases with each complete cycle, lasting between 30 to 60 minutes at its longest.

Your Brainwaves During Each Sleep Stage

Both alpha and beta brain waves are present during the wake stage. Beta wave activity is predominant during eye-open wakefulness. Beta waves, the most common daytime brain waves, are associated with engaging activities, such as problem-solving and other cognitive tasks.

Meanwhile, alpha waves, which can boost creativity and reduce symptoms of depression, are more dominant as we start to become drowsy and our eyes close.

During the early portion of stage N1, the brain produces more of the alpha waves that became predominant in the latter part of the wake stage. However, theta wave activity starts to increase as we move towards the end of stage N1.

Theta waves are often observed in deep states of meditation and are associated with implicit learning, information processing, and making memories.

Theta waves are one of the three characterizing traits of stage N2. Although theta waves dominate our brain activity, they are regularly interrupted by sleep spindles.

Sleep spindles are brainwave spikes especially noticeable on any piece of neurofeedback equipment or EEG device. They are a trademark of NREM sleep stages, and are believed to mediate many sleep related functions, from memory consolidation to cortical development.

Moreover, K-complexes, which are single, long delta waves, may also interrupt the theta waves. These K-complex delta waves will eventually replace all brainwave activity as stage N2 continues and transitions to stage N3.

The slow delta waves only occur during the deepest stage of sleep, and as such are predominant in stage N3. Delta brain waves are the slowest brain waves, measuring at 0.5 to 3 Hertz.

When delta brain waves are most dominant, your brain is involved in resting and regeneration.

During the REM sleep stage, we have very similar brainwaves to when we are awake. Our brain exhibits mixed frequency brain wave activity, most likely due to our dreams.

How to Improve Your Quality of Sleep

Improving the quality of our sleep helps us improve our physical and mental fitness. Although it is difficult to fully control the various factors that may interfere with our sleep, we can adopt habits that can encourage longer and higher quality sleep.

Some ways we can improve our sleep quality include:

–Sticking to a strict sleep schedule

–Limiting daytime naps to around 30 minutes

–Getting regular physical activity during the day

–Increasing exposure to sunlight or bright light during the day

–Avoiding caffeine during the afternoon and evening

–Starting a pre-sleep relaxation routine to clear the mind

–Incorporating Sleepium, a clinically validated mental fitness channel, into our pre-sleep relaxation routine can make it easier to fall asleep.

Sleepium utilizes neurofeedback together with virtual and augmented reality apps to calm our aves and heart rate, which allows for better self-management of stress and anxiety. This allows us to specifically target brain waves associated with sleep and “train” our brain to sleep better.

Sleepium has proven effective in reducing moderate anxiety by up to one-third in as fast as four minutes.

Using Sleepium together with an Apple watch or EEG headband lets us keep track of our brainwaves and heart rate, which allows for better self-management of stress and anxiety. This allows us to specifically target brain waves associated with sleep and “train” our brain to sleep better.