Our Chief Scientist explains the various brainwave bands, what they mean, and how you can use Healium to train your brain. 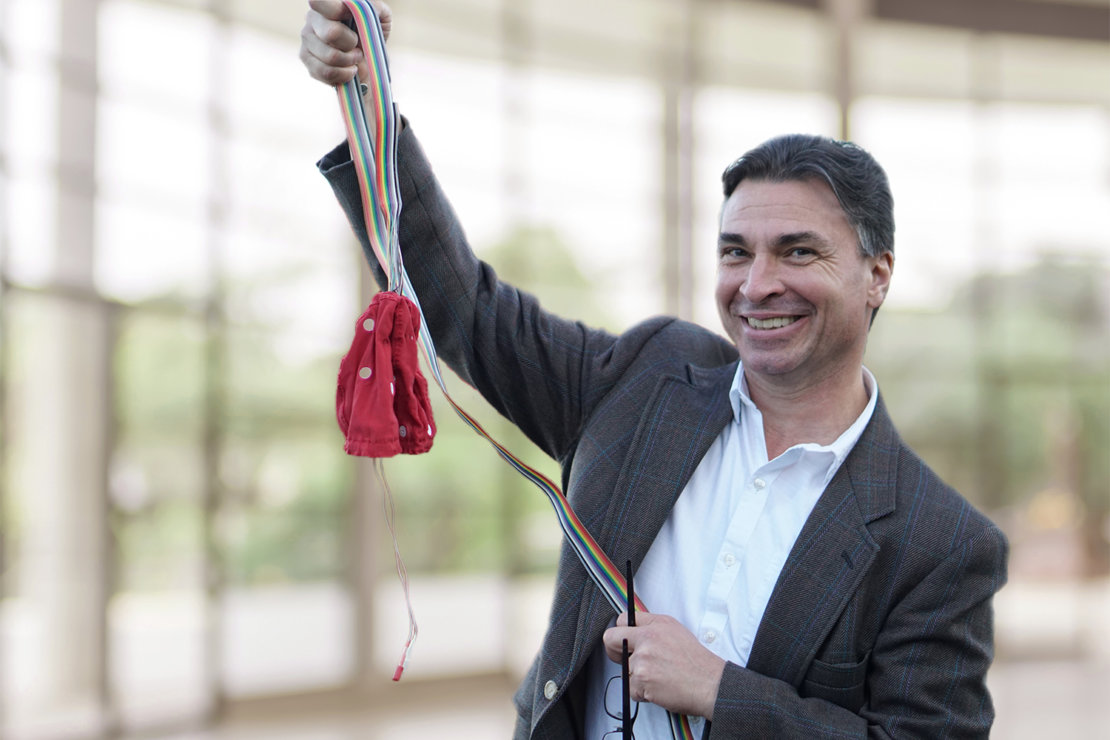 Every time a brain cell fires, there is an accompanying electrical impulse.  These individual impulses are far too small to be read by any standard equipment.  However, because our brain is composed of hundreds of thousands of neurons firing hundreds of times per second and in communication with each other, we can pick up any organized patterns that emerge.

Essentially, when neurons fire in synchrony, they create bursts of electrical activity. These symphonies of neuronal firing are read by sensors placed on the scalp.  Because there is so much electrical activity happening at any particular moment, the signal we receive is a bit on the messy side.  It’s messy because it’s essentially a collection of everything occurring at any particular moment in one region.  This pattern is the raw EEG and its signal looks something like this: 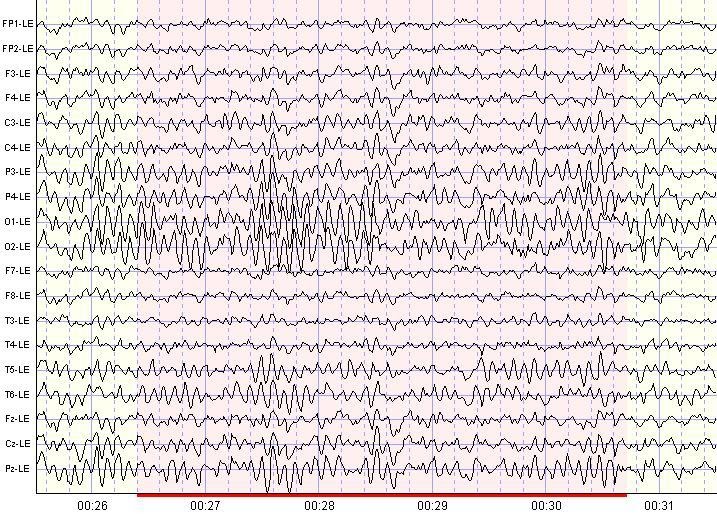 The image above is a screen capture of a 19 channel EEG signal.  Essentially, this recording is examining 19 locations on the scalp simultaneously.

This is what we see on the scanners in the background of medical TV shows and what most people imagine when they think of brainwaves. However, this group of squiggly lines doesn’t mean much unless you are a neurologist or an EEG technician!

These squiggly lines are very useful in a hospital setting when looking for gross abnormalities such as a seizure.  However, if we are wanting to look at more subtle changes in consciousness, the raw signal leaves much to be desired.

Lucky for us, techniques have been developed to take a raw EEG recording, like the one above, and filter it, allowing us to see all of the different frequencies contained within each of those 19 channels.  This deserves a bit of an explanation:

Brainwaves, just like any electrical signal can be described in terms of their frequency and amplitude.  Frequency refers to how many repetitions there are of the wave within a second of time, usually referred to as cycles per second (cps) and reported as hertz (hz). 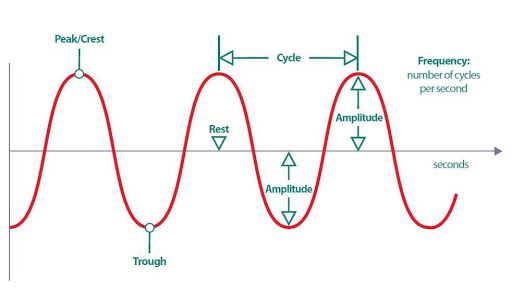 If the image above represents one second of time and there are two cycles occurring (each peak to peak is considered one cycle), we would describe this as 2 hz activity. At any given moment the brain is producing frequencies from as slow as you can measure (below 1 hz) to an unknown speed (we are still trying to figure this out).  However, the vast majority of brainwaves occur between 1 and 50 hz.  Consequently, brainwaves in this range are nearly always the focus of brainwave analyses.

The other dimension of electrical activity that is important to understand relates to power.  If speed is measured in hertz and relates to how many repetitions occur in a second of time, power is measured in microvolts and measures how big the waveform is. It is essentially a calculation of the average peak to trough of the electrical signal.  On the “brainwave metrics” diagram the vertical (y) axis displays the range of power.

In non-hospital settings, the EEG sample is processed through a mathematical formula (fast Fourier transform; FFT) that separates the various frequencies within the raw signal and averages the power of each frequency, giving you a concrete measurement of “how much” activity is happening at different frequencies.

At any given moment, at any point on the surface of the brain, you will find electrical activity of every frequency we can measure, from the very slow (1-2 hz) to the very fast (100 hz).  That is a bit overwhelming to consider and is typically simplified by creating clusters of frequencies that many people have at least heard of, including delta, theta, alpha, and beta. 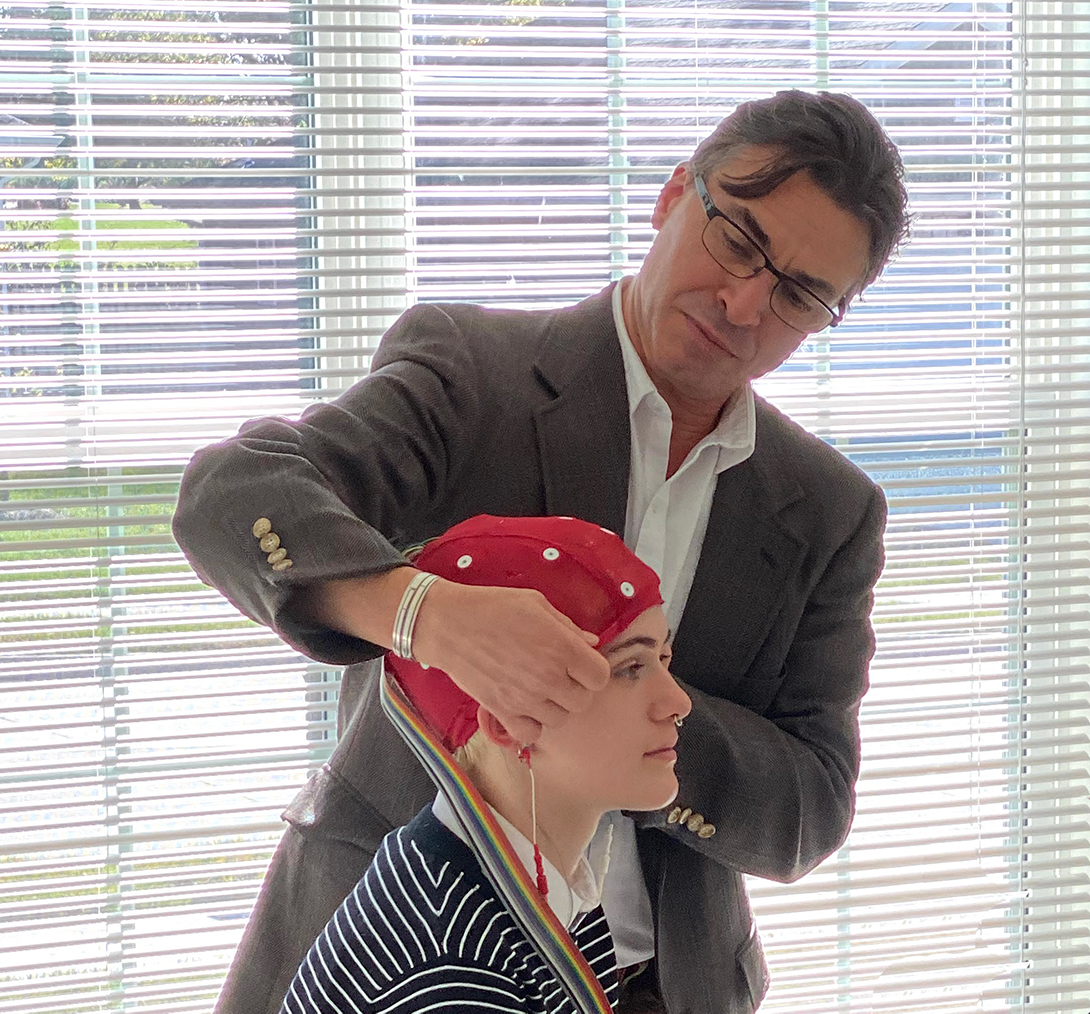 Brainwave bands are simply clusters of frequencies that are lumped together based loosely on their shape and function.  Different researchers, neurofeedback companies, and clinicians define these EEG bands slightly differently. The BrainLink Lite headband, used with Healium, uses the following categories:

Delta waves (0.5 – 2.5 hz) are the slowest brainwaves.  When they are dominant, the person in question is probably unconscious.  Just to be clear, we always have delta activity, but when it increases significantly, it will be very difficult (if not impossible) to maintain any sort of alert consciousness.  When this frequency is dominant, the brain is involved in resting and regeneration.  Think about what is happening during deep sleep.  You might also see heightened delta activity in areas of the brain that have been damaged in some way.  Again, it is the brain’s way of shutting things down for repair.

Theta waves (3.5 – 6.75 hz) are obviously a bit faster than delta, but still very slow.  These brainwaves tend to increase while retrieving certain types of memories, in moments of creativity, and during the “twilight state” that we experience just before falling asleep.  Theta waves are often associated with the subconscious.  As such, this is generally the place that people shift toward during a hypnotic state; a state that is more open, creative, and suggestible.  This also happens to be the dominant frequency for young children.

Low Alpha waves (7.5 – 9.25 hz) When used in this way, “low alpha” refers to the frequency range rather than the amplitude of the waves. To minimize confusion, this band is sometimes referred to as Alpha1. Alpha is like our neutral; our idling speed.  Low Alpha is generally associated with being relaxed and internally focused.  For this reason, it is generally associated with states of meditation, similar to Transcendental Meditation or Zen.

High Alpha waves (10-11.75 Hz) This band is often referred to as Alpha2 and is associated with a mental state of open awareness or quiet readiness.  This implies being capable of responding to a wide range of changes in the environment. In peak performance training, this state is associated with fast reflexes and accurate responses. This state may be a component of being in “the zone” or a flow state.

Low Beta waves (13-16.75 Hz) When this brainwave pattern is observed in the sensorimotor cortex, it is referred to as the sensorimotor rhythm (SMR) and is connected to reduced attention to sensory input and decreased motor activity. It can be thought of as mentally alert without action or “reflecting before acting.” When this pattern is observed in other areas of the brain it is referred to as Low Beta or Beta1. This band often increases during problem-solving.

High Beta waves (18 – 29.75 Hz) This frequency range is often elevated during anxiety, worry, or rumination or in connection with emotional intensity. This band can also increase during productive cognitive engagement, or working too hard (over-efforting).

Low-Gamma (31 – 39.75Hz) This range is sometimes considered another range of High Beta rather than Gamma. These frequencies often demonstrate high amplitudes in persons who are worried or ruminating or feel “stressed out,” or hyper-vigilant.

Mid-Gamma (41 – 49.75Hz) represents a range of brain waves that are obviously very fast.  They are generally at the top of the range that you will see in any research or brain training.  Increases in Mid-Gamma waves are associated with a very sharp focus and feelings of creativity, insight, and being energized.  Bursts of this frequency are often seen during high-level information processing or when various parts of the brain are working together to integrate information.  Unlike beta forms of processing, Mid-Gamma activation is often associated with a more effortless, easy form of understanding, such as we might see during an “aha” moment; effortless insight.

Hopefully, you can begin to see how and why the fluctuations in different brain waves can often tell us something about the person’s state of consciousness AND how certain patterns–if they become rigid and inflexible, can be related to certain concerns.

For instance, too much theta without accompanying beta often suggests a brain that is underactivated.  This is a brain that may have difficulties doing its job efficiently or effectively. If this pattern shows up in the frontal lobes, the person might have difficulty inhibiting their impulses, sustaining attention, or successfully utilizing their working memory. This pattern (excessive Theta/Beta) is the stereotypical ADHD brainwave pattern.  On the other hand, a brain that consistently has large amounts of High Beta or Low-Gamma activity, particularly when it is not needed, may show signs of anxiety, agitation, or sleep problems.  This is an overactivated brain; one that is hyperaroused. 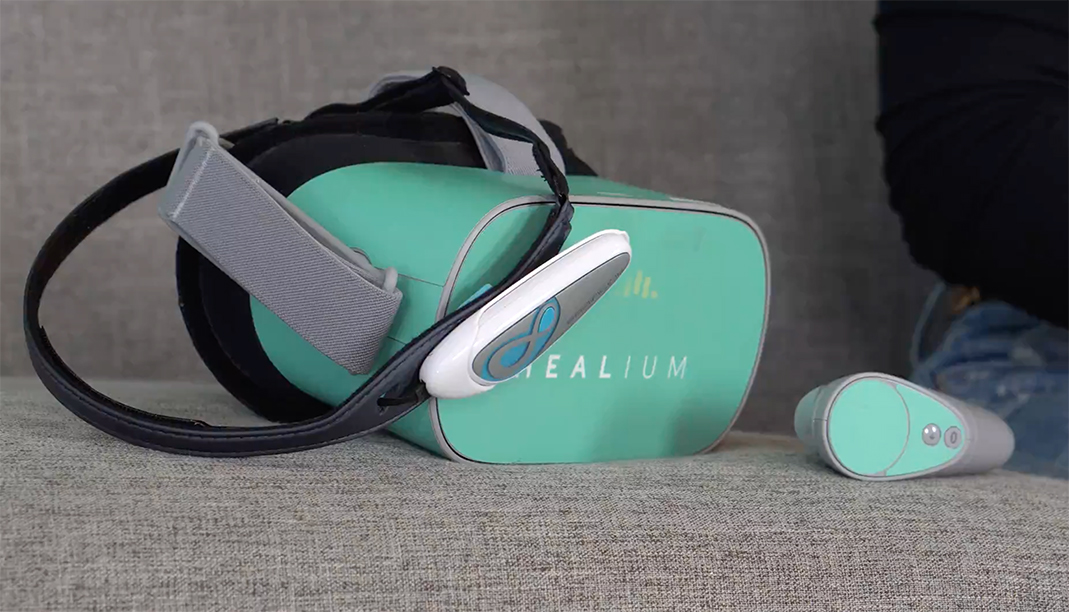 Training Your Brain with Healium

Healium currently utilizes a protocol to help you train for a focused calm brainwave states. Luckily, you won’t need a full EEG cap to use your brainwaves with Healium. You’ll only need a BrainLink Lite EEG headband and a pro subscription to Healium.

What is focused calm?

The EEG patterns most associated with stress and anxiety are increased fast-wave activity (High Beta/Low-Gamma) and decreased slow-wave activity (Alpha; Price and Budzynski, 2009).

Not surprisingly, neurofeedback strategies designed to reduce stress and anxiety have focused on decreasing these specific patterns. Sometimes this is done by rewarding slower brainwave patterns (alpha; Moore, 2000; Hammond, 2005 a and b), and other times it is accomplished by simply rewarding decreases in High Beta/Low-Gamma activity, which is the approach taken in Healium.

Research has consistently shown that excessive slow activity (Theta and/or Low Alpha) in frontal and/or central regions of the brain is associated with cognitive slowing, inattention, and lack of alertness. Specifically, this pattern is usually examined as a ratio of slow to fast waves (Theta/Low Beta). If a high ratio is considered potentially problematic, a low ratio is often sought for times of focus or peak mental performance.

Using the BrainLink Lite EEG headband can give you access to your brainwave data in a super simplified way. While it’s not diagnostic and only meant for self-awareness, when combined with Healium’s app, you’ll be able to see how your brainwaves fit into the brainwave bands by reviewing your data dashboard.

Neurofeedback is a powerful tool. Use it to improve your sleep, increase your focus, calm your mind, and rewire your thinking to reduce ruminating thoughts.  Your thoughts have power.

*Reminder: Healium is not a diagnostic tool or a replacement for psychotropic medications.