After Trauma: How Heather Rewired Her Brain with Neurofeedback

After trauma changed the course of her life, Heather discovered the power of neurofeedback to help herself and others rewire their way of thinking. 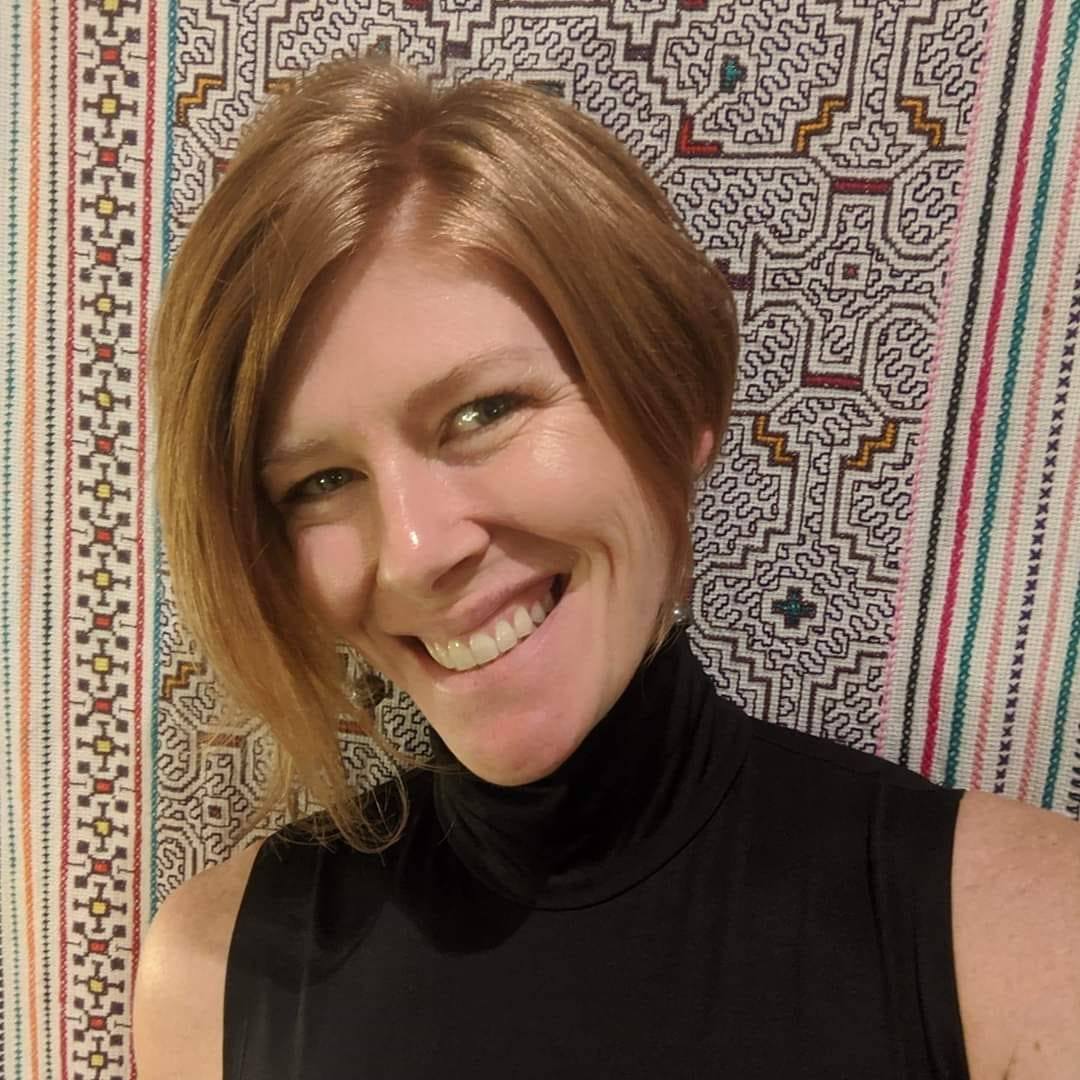 Heather Hargraves is a trauma therapist and researcher in Ontario, Canada. Heather specializes in neuro and biofeedback technologies to provide support to broad ranges of neurologically and psychologically traumatized clients within her practice.

Heather’s story is compelling and inspiring in many ways. She shares her journey of becoming a passionate trauma therapist and researcher, why she recommends her clients use Healium in between neurofeedback sessions, and the reason she is confident in the healing tools Healium provides herself and others.

In 2000, twenty-one-year-old Heather was four months into her university program when she was in a terrible car accident on New Year’s Eve. “My boyfriend at the time was making a left hand turn across traffic when I looked out my window and saw a car inches away from me. The car drove directly into my door and our car shot down the road. My partner said when he looked over at me, I was just basically wearing the car. He said I became very combative and was screaming, but I don’t have any of those memories,” Heather says.

Heather’s first memory is the Jaws of Life tool inches from her face. It took them an hour to cut her out of the car. After transporting her to the hospital, doctors discovered her broken jaw, two shattered teeth, her pelvis crushed in eight different places, three broken ribs, a collapsed lung, a torn liver, and a crushed ankle. “My recovery was about a solid seven years of Complex Pain Syndrome that wouldn’t go away. I had 6 surgeries that wouldn’t get rid of it. It was not great,” Heather explains.

Heather took eight months off from university to recover. When she returned in the fall of 2001, she changed her major to philosophy. “I started becoming very interested in the process of how we come to know things and how things make sense to us. I completed my undergrad and two weeks later, my brother was killed in a car accident.” Heather informed her parents and identified her brother’s body. We were not prepared for what we were about to walk into.

“I remember basically upon seeing him, I dissociated and spent a better part of the next year or two really trying to understand what had happened to me. I just went off the deep end and I developed agoraphobia. I was really traumatized, in and out of dissociation, and having panic attacks, so even though I wanted to go back to get my master’s degree I couldn’t really go back because sitting in class, nothing made sense,” Heather explains.

During this time Heather was given antidepressants. She discovered they were not a good fit for her. “I felt extremely numb and empty on them. I understand why I had this experience now, but I had nobody to help me understand the relationship to my nervous system and what the medication was doing. I was off medication pretty soon after, due to the pain medication and anti-inflammatory drugs that were making me sick,” Heather says.

She believes medication is a valuable tool. However, she advises that the best outcomes are usually achieved when they’re taken under the guidance of a licensed therapist.

A journey of self-discovery led to recovery

In 2004, not quite a year after Heather’s brother passed away she started therapy and saw an experienced clinician. Her therapist started her on a journey of resocializing by encouraging Heather to read to a blind man. She also resocialized cats at the Humane Society for close to three years. Heather worked with a young girl and her family through a hospice volunteer service until she passed away and then continued supporting the family for another year. Heather found that by helping people she started to see personal progress.

In 2008, she moved to India for three months and lived at an Ashram. “I was up every morning at 4:30 to shower, then straight to meditation for an hour, chant for an hour, lecture, yoga, eat, work out, and repeat in the evening. I really enjoyed it and I think it really helped me,” Heather recalls.

While in India she and her partner got pregnant and had their son. When Heather was six months pregnant her home was struck by lightning and this caused her water to break early. She spent the next 75 days on bed rest with her son. He had already been diagnosed with gastroschisis so her pregnancy was high risk. Her son required two surgeries within the first three months of life and nearly died before the second one as his connective tissue had made it impossible for his bowels to function properly.

Shortly after that in January of 2009, Heather opened her own yoga studio for about a year. Heather noticed that through learning and changing her lifestyle habits a lot of her symptoms started improving. “After I turned to yoga and meditation–that was it. I’ve never needed to take another medication to help manage my mood.” 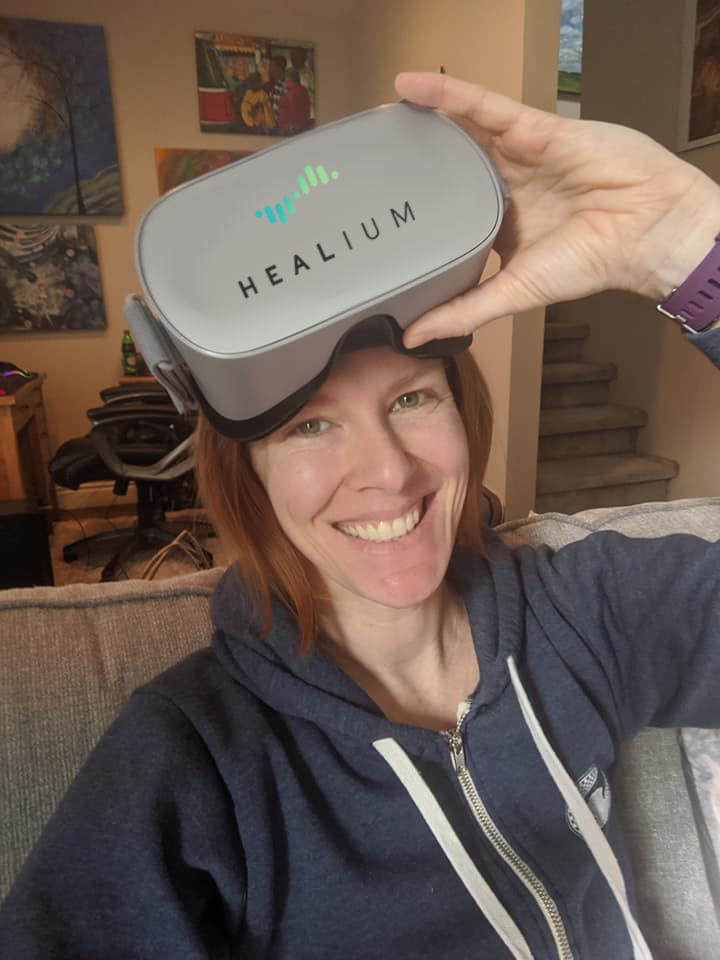 Heather returned to school again for psychology in 2010. She had an interest in studying and understanding the neuroscience of meditation and consciousness. It was in 2012 when Heather discovered neurofeedback during her second year counselling course.

She joined a lab studying neurofeedback and worked as a research assistant for a few years. A neurofeedback therapist came into her counseling course.

“I remember listening to her talk about neurofeedback and my mind was blown. It was the first time somebody said something that made sense to me about my experience. She talked about rewiring your brain and that really resonated with me. I felt like my brain had been rewired from my accident and I was trying to find my way back,” Heather explains.

Heather eagerly asked if she could get access to the research and her supervisor received special permission to share it with her. Heather focused her undergrad thesis on understanding the various forms of meditation and how they could best be used for mental health challenges.

When Heather started her master’s degree in counseling with a thesis in neuroscience, she began to study the therapeutic induction of altered states of consciousness via neurofeedback. She discovered that her thesis work really changed her brain. ”I felt like my anxiety was a dragon in the corner that I had learned how to feed and be nice to and with neurofeedback the dragon vanished,” Heather explains.

“For my thesis research, because it was the first thing I did, I didn’t really know much about it. I personally engaged in neurofeedback a lot, and I still do. I would do it a few days a week because I noticed it really focused me. I learned that it was helping me surrender to the moment and finish what I needed to get accomplished.”

Since Heather was still struggling with some dissociation, it was difficult for her in areas that involved math. In 2011, after three tries, it finally stuck. Heather completed her first honors in philosophy (2004) and her second honors specializing in psychology (2015). While doing research for her studies, she came across Dr. Tarrant’s research. 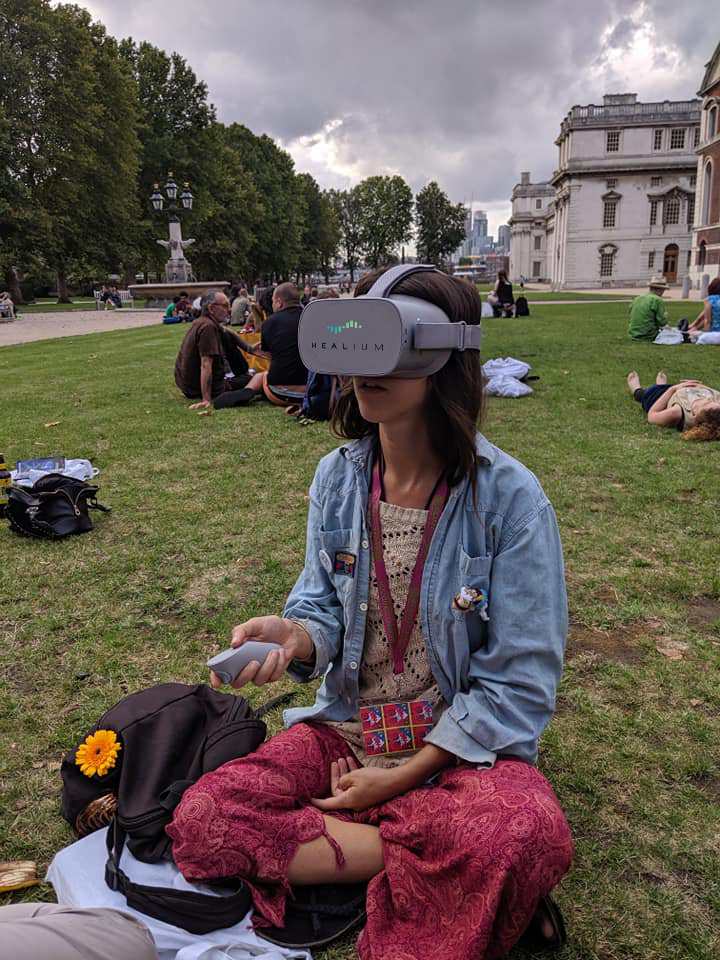 Bringing relief and therapy to others

Dr. Jeff Tarrant had just founded the NeuroMeditation Institute when Heather started training with him. “Everything he was teaching me I already had a sense of because I had completed research on the different types of meditation and brain waves involved. From there we moved into private practice and have continued working together in the NeuroMeditation Institute,” Heather says.

Heather has been working for about five years in clinical practice. She says a lot of people come into her office for relief from prolonged stress. Heather has worked with clients who have found that the traditional talk therapy modalities have reached their limit of effectiveness. Yet, with neurofeedback, she is able to dig deeper than the surface level and help them train their brain.

“Instead of them just feeling like a failure, it’s like, oh these are the internal relational pieces you needed along the way. It’s like the personal training you need to get there. The goal is that people learn to do it on their own through retraining how they use their attention and intention and over time they don’t need to be reminded anymore,” she explains.

Heather has also worked with clients who have been told they would be on medication for life, yet most of her clients have either come off of medication completely or dropped their dosage in a way they feel most comfortable with.

As far as the hardware available in the virtual reality market, she’s looking forward to companies creating more personalized and portable headsets that can be taken home and used more frequently. Heather recommends her clients use Healium in between sessions. “I think what Healium is offering is a good introduction to neurofeedback. I really like Healium and its VR product because I feel like it’s a nice scaffolding. I personally use it all the time,” she says.